A year ago, I decided to start a blog to document our move to Bydgoszcz, Poland.  That move evolved into a roller coaster ride of ups and downs, highs and lows and crazy turns and loops.  What my husband and I thought was going to happen, didn’t.   What we thought might be a five year adventure living overseas was cut short….way short.  So we just decided to enjoy the ride while it lasted and cram in as much traveling and sight-seeing as we could.

So what has happened in my life in the last twelve months?  I have 8,249 memories. (read to the end to find out the significance of that number)  But here is a quick recap.

And how did I accomplish all this travel? By taking 19 Airplane rides covering 40,878 miles. This was my first view of Poland from the airplane, the capital city of Warsaw.

7 Train rides covering 1,343 miles.  Train travel is the way to go when traveling in Europe.  It’s fast, relatively inexpensive and so relaxing! I wish we had done more of it.  This is the train we took from Vienna to Salzburg, Austria.

I also spent countless hours in a car driving (or being driven) too many miles to even think about counting throughout Poland, Germany, Lithuania, the Czech Republic and Arizona.  I got up to 120 mph in Germany and cars were still passing me!  And we saw the only snow driving in Lithuania.

Boat travel is also an option….we went on 2 free boat tours courtesy of our hotels in Gdansk and Krakow.  Here is a view of Gdansk from the Vistula River. 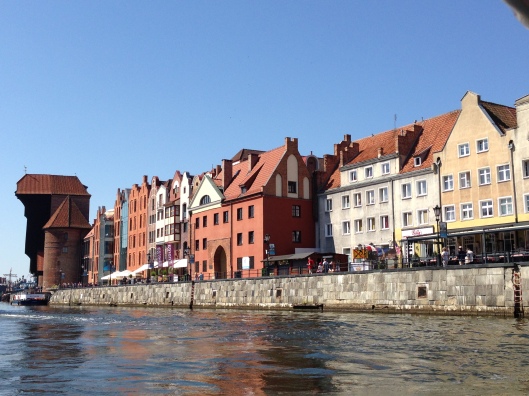 This is also a great way to see things you can’t walk to and isn’t necessarily a “tourist stop”, like the Shipyard where Lech Walesa started the Solidarity Movement in Poland.

Or if you want exercise while doing a little local sightseeing, try paddleboating on the Brda River.  We did that three times.

And there is also the ever popular….walking, but not walking aimlessly. We took 4 Free Walking Tours.  They are usually several hours long and LOTS of walking, but the best way to get an overall tour of the city with lots of history and random facts thrown in. Most tour groups use colored umbrellas so you can find them, this one used a yellow suitcase.

And we didn’t just walk while on Free Tours, we also walked all over the city where we lived.  There was so much to see, and walking was the best way to discover parks, random statues, churches, beautiful architecture, new restaurants, local stores,  farmer’s markets….so many other things; it would be hard to tell you everything.

So what did my husband and I do while exploring those cities?  Of course, my number one mission was to see churches.  And that we did.  I lost count, but I saw at least 32 churches and cathedrals, with a Buddhist Temple or two thrown into the count.  Some were small, and some were HUGE, like the Dom Cathedral in Berlin which has a pipe organ with 7,269 pipes!

My husbands number one mission was to see museums.  We made it to at least 18 Museums…again, probably more, but I lost count.  Some more unusual than others, like the Museum of Soap and Dirt in Bydgoszcz, Poland.

You can’t go to Europe and not visit a few palaces and royal residences, we made it to 5 different ones.  This is Schönbrunn Palace in Vienna, Austria in December.

Castles are big in Europe too.  We toured 3 Castles, including the largest brick castle by surface area in the world, Malbork Castle in Poland. 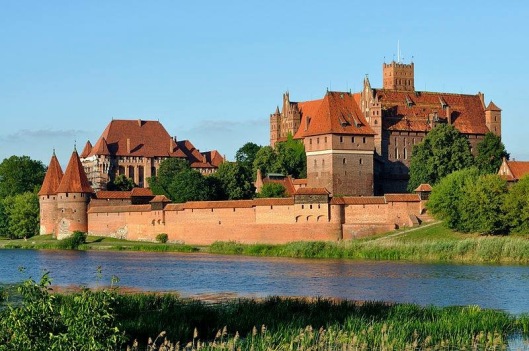 Light displays also made it onto the list.  I saw 3 Light Displays.  The first was the annual Bella Skyway Light Festival in Torun, Poland.

and two located in Botanical Gardens in Virginia

We also visited one zoo….which is part of Myślęcinek Park in Bydgoszcz….one of the largest parks in Poland.  We saw a bear or two along with a lot of other animals.

We also went to at least 3 Historical Houses. You know…those places where famous people used to live.   This is the Nicholas Copernicus house in Torun, Poland.

And then there are all the FUN THINGS that you can do.

Take a ride on a huge Ferris Wheel in Gdansk.

Watch the sunset over the Baltic Sea.  Brrr….freezing cold even in July! 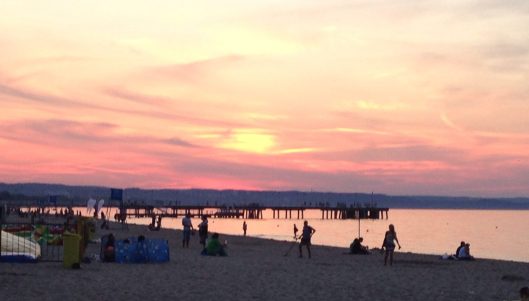 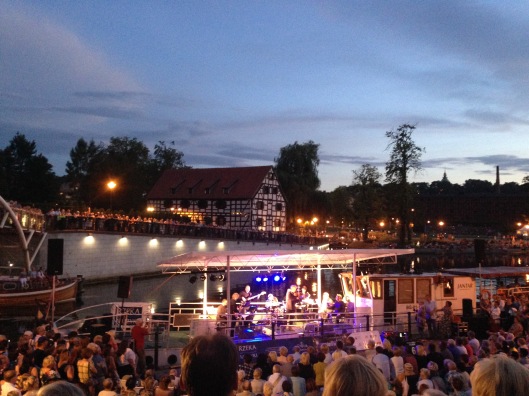 or a professional baseball game.

Fly back home just to see the VT Hokies play 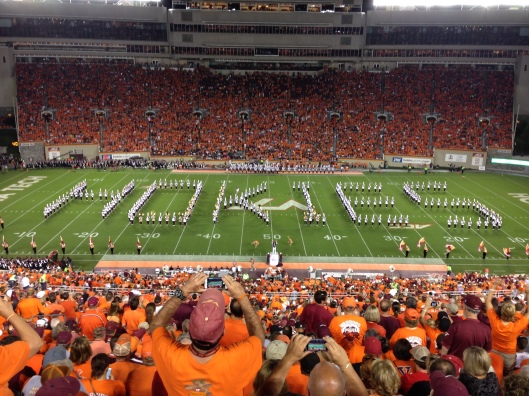 Climb up to the observation deck of the Bydgoszcz Water Tower.

Learn how to make Pernicki (Gingerbread) in Torun, Poland. Best gingerbread ever, especially when it’s warm!

Go to a Philharmonic Concert in Bydgozcz.  Most respectful audience ever!  Americans could learn a thing or two about how to act during a performance.

Visit a Foreign Embassy.  This is the Polish Embassy in Berlin where I had to get a special visa allowing me to stay in Poland.

Spend 3 days in the 10th Military Hospital in Bydgoszcz.  Okay, well, maybe you don’t want to do this.  The doctors wanted to take my gall bladder out….I opted to keep it.  The medical care was good, but in a 1950’s kind of way.

Experience a Christmas Market or maybe multiple Christmas markets in 3 different countries.  Definitely do this, as many times as possible! They have the biggest and yummiest pretzels in Vienna!

Make Christmas Crafts …I made a Christmas tree out of buttons with other NATO wives.  It’s always nice to meet new people!

Eat amazing food!  Try every restaurant you can….and this comes from a picky eater. 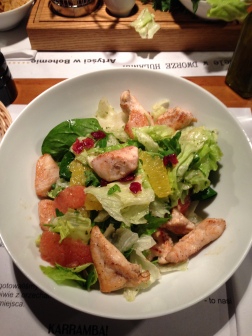 Some of my favourite memories were teaching our Polish friends, Joanna and Robert, all about Hokie football….watching the games in the wee hours of the morning and teaching them how to shake the “gobbler” after a Hokie score. 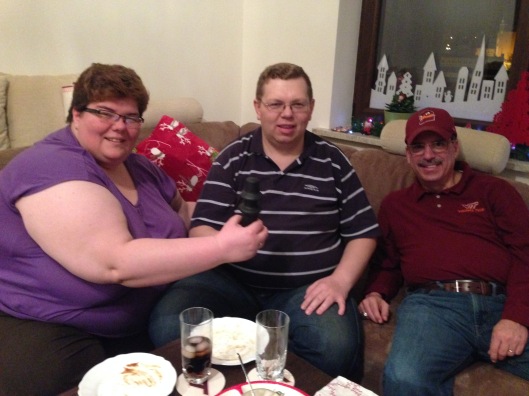 Or having some lody (that’s ice cream in Polish).  I am not a big ice cream eater…but Polish ice cream is the. best. ever.  Dark chocolate….yummm. 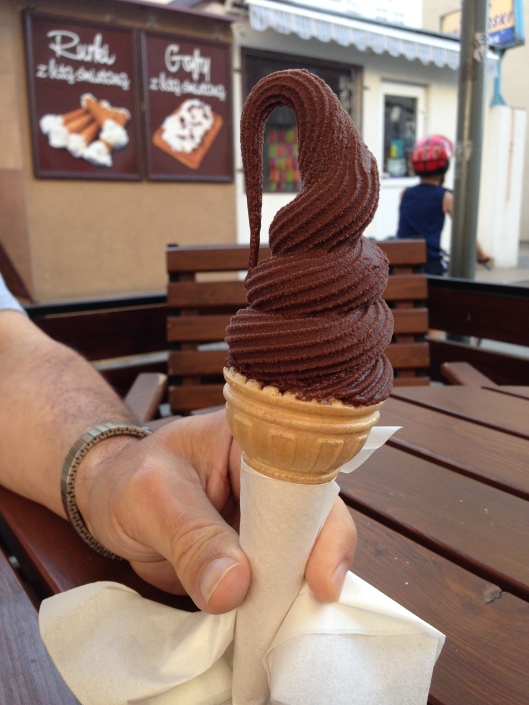 Or just walking and talking with good friends, Michelle and Tami, all over town.  No destination in particular, just walking & talking.  I think I miss that the most….and shockingly I have no pictures!

I have a least favourite moment too….when I broke my right ankle while touring around in Korea.  Please don’t do this while you travel.

And not everything you do while living overseas or traveling is fun and exciting.  I also did mundane things….like learning how to to grocery shop in Poland (it’s all about the pictures on the packages and google translate on your phone!) 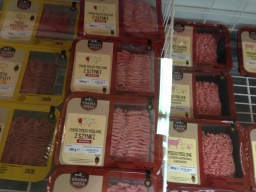 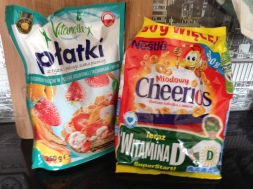 And also how to hang laundry on a balcony without fear of having my underwear blow over the side.

But I saved the most important thing for last.  Take pictures, lots of pictures.

Remember that memory number?  I took 8,249 photographs!!  The magic number of memories.

And that is not counting the ones I deleted because they were duplicates or blurry or had a “why am I taking a picture of that?” moment.

Guess it’s time to buckle down and start blogging and scrapbooking!