When my girls were little and in Kindergarten, D-Day was a very special day.  They learned their letters and sounds with a curriculum that included “Letter People” and “D” Day was when they learned about Mr. D and his Delicious Doughnuts.  It was also the day the only male teacher at the school, Mr. Davenport (aka Mr. D.) would bring them boxes of delicious Dunkin’ Donuts.  The kids loved it.

But this post is about another D-Day, June 6, 1944.  Today is the 73rd Anniversary of D-Day.  There is a National D-Day Memorial and it’s not located in a tourist “hot spot” like Washington, D.C, where there are a lot of other military memorials.  The National D-Day Memorial is located right off Route 460 in Bedford, Virginia.  My husband and I stopped there on a trip back from a football game way back last October and I’ve been waiting to share this with you until the real D-Day, June 6th. 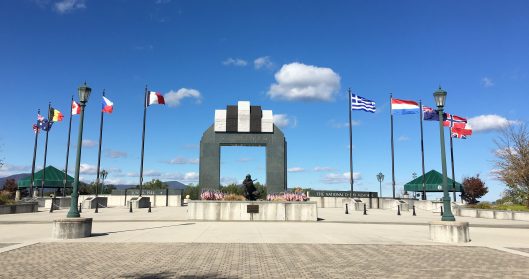 The memorial is a tribute to the Allied Forces who participated in the invasion of Normandy during World War II.  More than 5,000 ships and 11,000 aircraft supported the landing of 150,000 Allied troops on a 50 mile stretch of beach in Normandy, France in an attempt to break the Nazi stronghold on France.  More than 9,000 Allied soldiers were killed or wounded on that one day, June 6, 1944.  That number included 2,499 American service members.

But why is the memorial in Bedford, Virginia, a small town and county nestled in the Blue Ridge mountains of southwest Virginia?  It’s because of the “Bedford Boys”.

On the shores of Normandy that day, 44 soldiers, sailors and airmen from the town and county of Bedford were killed.  Thirty-seven of those were from one company, Company A, which was part of the first wave of the attack on the beach.  The Bedford Boys included two sets of brothers: twins Roy and Ray Stevens, with Ray being killed during the landing while Roy survived, and Bedford and Raymond Hoback, who were both killed.  In comparison with the population in the 1940’s, Bedford suffered the nation’s severest per capita D-Day loss of life. (Interesting fact: The losses of the soldiers of Bedford inspired a best selling book, “The Bedford Boys” by Alex Kershaw as well as inspired the movie “Private Ryan”.)

Here’s an arial view of the memorial from a postcard I bought. 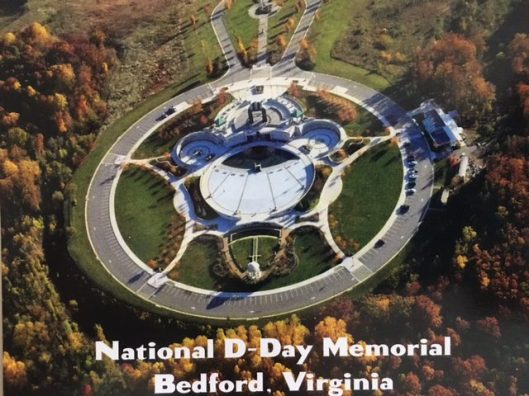 (Yes, I buy postcards from everyplace we visit…and I never mail them.  I keep them all for myself!  But they come in handy for times like these.) At the bottom, you’ll notice an area shaped like a shield.  That is the Reynold’s Garden and it’s made to look like the Supreme Headquarters Allied Expeditionary combat patch. 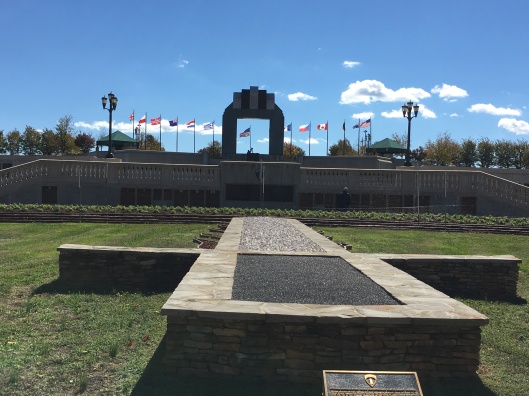 At the bottom of the emblem is a rotunda with a statue of General Dwight D. Eisenhower.  (No I didn’t scribble on the picture, that’s wire fencing they put around the garden to keep the bunnies from eating the flowers.)

General Eisenhower was name the Supreme Commander Allied Expeditionary Force in 1943 and it was his words that launched the invasion on June 6, 1944.

Make sure you look up! The ceiling is the battle plan for the invasion that shows where all the ships, planes and troops were moving and their plan of attack all along the coastline, on the beaches of Omaha, Utah, Gold, Juno and Sword. 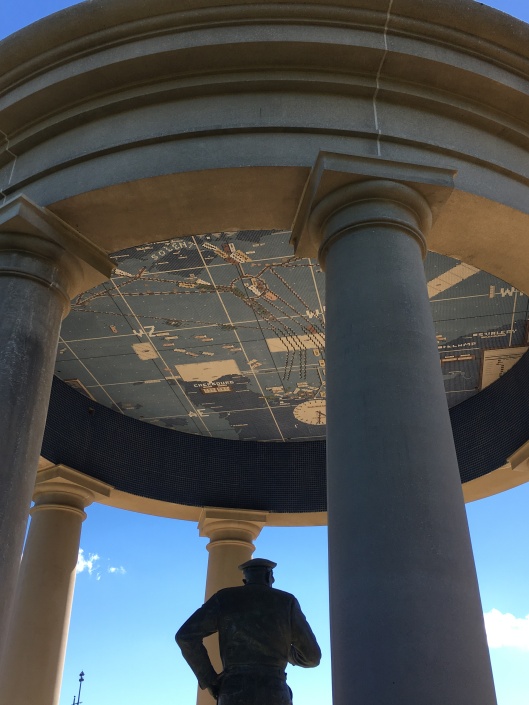 (Hint if your neck gets tired of looking up, use the camera on your phone.  Switch the image (like you want to take a selfie) and hold your phone flat and parallel to the ground.  You can zoom in and see everything.)

Walking along the paths leading from the rotunda on both sides are lots of statues of the military leadership that had a part in the invasion….like General Omar Bradley. 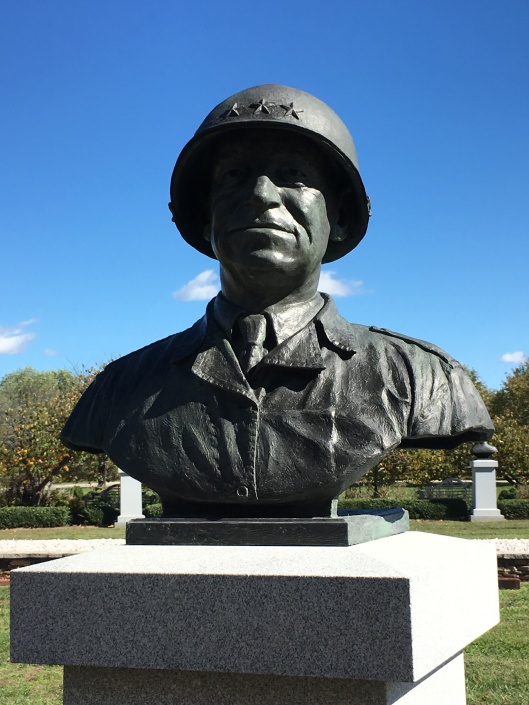 Closer up is the Elmon T. Gray plaza with a wall covered with bronze plaques that include the names of all 4.413 Allied service members who were killed in action on D-Day, June 6, 1944.

In front of the plaza is a representation of  “the beach” showing how the soldiers came up on the beach.  The flags represent the twelve nations that were part of the invasion: right to left: United States, Australia, Belgium, Canada, Czechoslovakia, France, Greece (hidden), Netherlands, New Zealand, Norway, Poland and the United Kingdom. 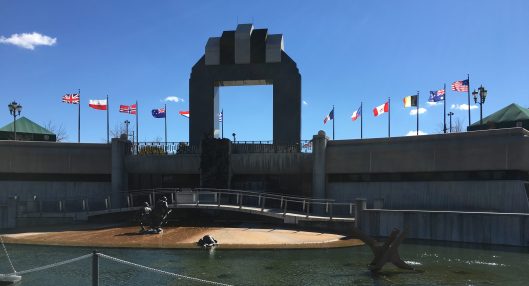 You might not have noticed these in the pictures above.  It’s called a Hedgehog.  It was an obstacle set in the water by the Germans to scuttle the landing crafts as they were making their way to the shore.

Once the men got to the shore, they were faced with climbing the cliffs.  This is the view from the bottom.

And this is the view from the top. He made it!

Now that you’ve seen the backside of the D-Day Memorial….let me show you what you see as you drive up. (yes, I know this is a little backwards, but that soldier climbing in the last picture is climbing up to this. 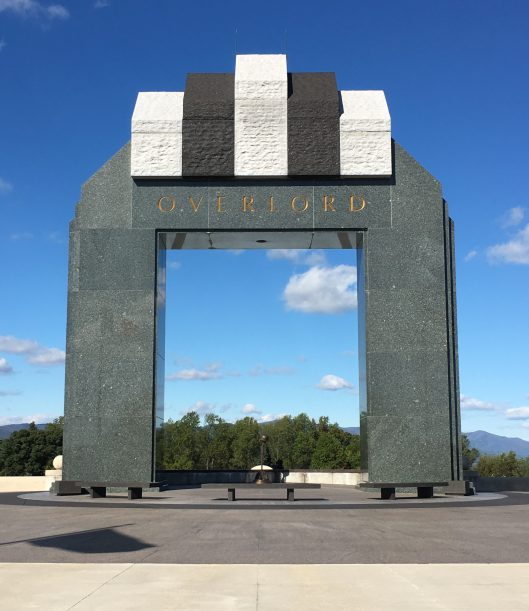 The Triumphal Arch.  It rises almost 45 feet in the air. 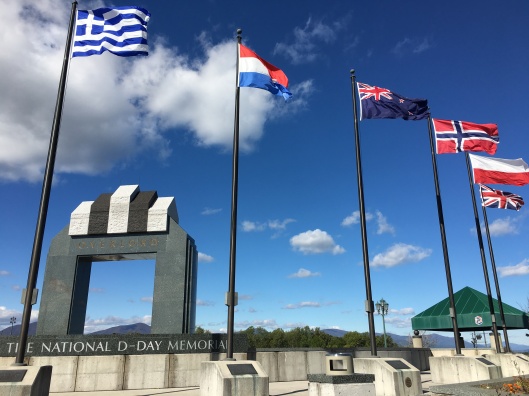 Engraved across the top is the word OVERLORD.  That was the military code name for the D-Day Invasion.

I’m going to leave you with this.  Every American soldier, sailor, and airman who participated in the D-Day invasion of Normandy received this message of inspiration from their Supreme Commander, General Dwight Eisenhower, just before D-Day. 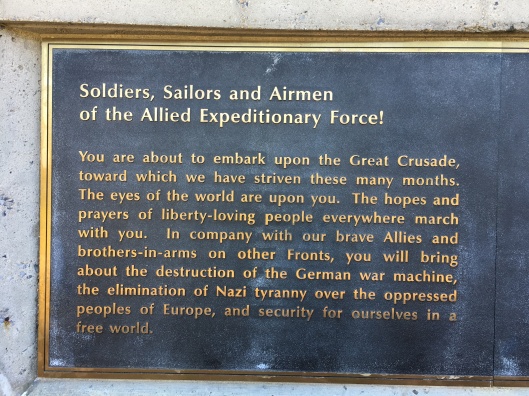 And a Statue called “The Final Tribute”….the inverted rifle and helmet symbolizing death in battle, the ultimate sacrifice of the fallen.