There is a an old saying….”a man’s home is his castle”…meaning it’s a place of refuge, a place where he can do anything he wants.  And that is what Boyce Luther Gulley did.  Over a 15 year period from 1930 until his death in 1945, he built a “castle”….adding to it piece by piece with whatever he could find…old bottles, tiles, railroad tracks, telephone poles, pieces of adobe, automobile parts and too many more items to mention…and all was cemented together with a mortar & cement made with among other things, goat’s milk. 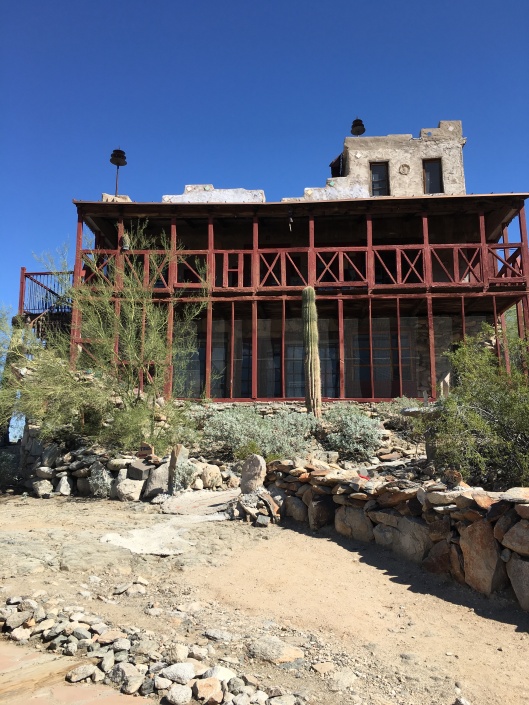 Situated on eight acres of land on South Mountain in Phoenix, Arizona lies this “Mystery Castle”.

But first….let’s back up a little and get a little history of the man and his “castle”.  In 1927, Boyce Gulley was living in Seattle, Washington with his wife Frances and almost  4 year old daughter, Mary Lou.  He and his daughter would often go to Alki beach where they built sandcastles.  Mary Lou would cry when the water would wash away her castles and her father, trying to comfort her would tell her that she was his princess and that one day he would built her a castle big enough to live in.  He lived up to that promise….but did it in a desert hundreds of miles away.  You see, Boyce Gulley was diagnosed with tuberculosis and given just 6 months to live.  Hoping to spare his family and protect them from the disease, he deserted them, not telling them where he was or if he would be back.

He travelled to the desert of Arizona hoping that the dry air would help his disease…and it was there that in 1930 he started to build the 8,000 square foot castle on a piece of land he purchased that was over top of a gold mine.  The deed stipulated that the land had to be improved yearly…so he spent the rest of his life building….and improving until 15 years later the castle had 18 rooms, including a chapel, a cantina, wishing well, a dungeon (every castle needs one of those!) and 13 fireplaces. (he was one of 13 children and that was his lucky number).

Let’s get a closer look at the construction….it’s an odd conglomeration of bottles, adobe tiles, old automotive parts, and whatever else Mr. Gulley could find at the local dump and swap meets and bring to the property on his mule….like this wagon wheel that holds up the walkway to the house.

This stone bench is outside the main entrance to the house.

Bottles and broken tiles make up a “window” on the patio with the view of Phoenix.

There are also telephone poles in one room that are beams holding up the ceiling in this room.  And I didn’t get a picture, but the floors in one room are made from old chalkboards from an old schoolhouse.

as well as a window that is made from the wheels of Gulley’s Stutz Bearcat.

Below is the “Wishing Well” on the patio area. Directly below inside the house is a cantina.  So when you “made a wish for a drink”, all you had to do was use the pulley and your drinks would appear from below…..providing there was a bartender down there, that is!

So you can be out like my Mom enjoying the sunshine and the the view by one of the 13 fireplaces and a have a drink too!

Mr Gulley sent a few letters to his wife and daughter the first year or two, but he never told them where he was or why he left.  They finally found out in 1945 when a telegram arrived from a lawyer in Phoenix informing them of his death…not caused by tuberculosis, but cancer….and the “castle” that Mary Lou inherited.  And soon after a letter arrived that he had written just prior to his death telling them why he left them so many years ago.  Gulley also left instructions that the castle was Mary Lou’s to keep but that she couldn’t open the trap door in the “purgatory” room until January 1, 1948!  Here is the guard to that trap door. 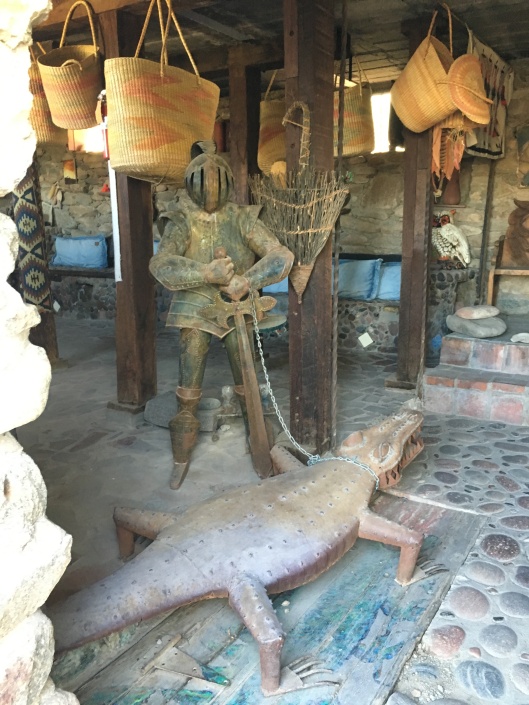 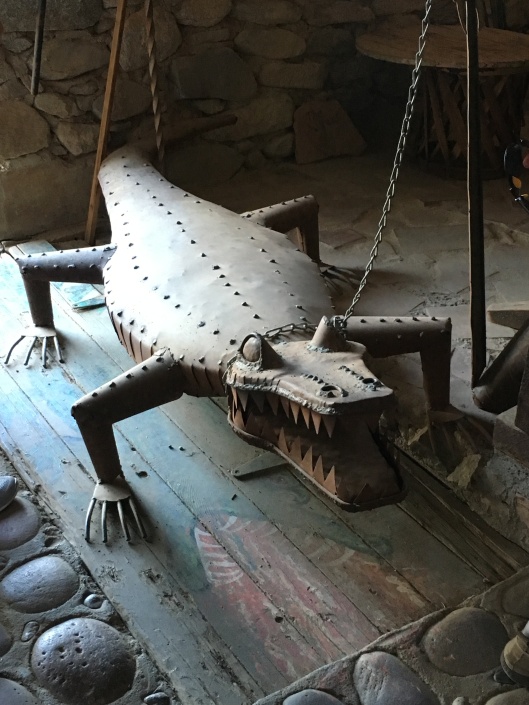 So Mary Lou and her mother, Frances came to Phoenix to live in the castle her father built for her.  And she abided by his wishes to not open the trap door.  Let’s go in and take a look at a few of the inside rooms.

The Saguaro Room is where you’ll find this cactus because well if it’s in the way when you’re building, well, then you just build your room around it and then decorate it with lights!…although there was no electricity or plumbing until 1992!

The Saquaro room is also home to this bed on old railroad tracks.  No need to make your bed….just slide it under the floor.

Even though there was no electricity or indoor plumbing until 1992, there was a kitchen. 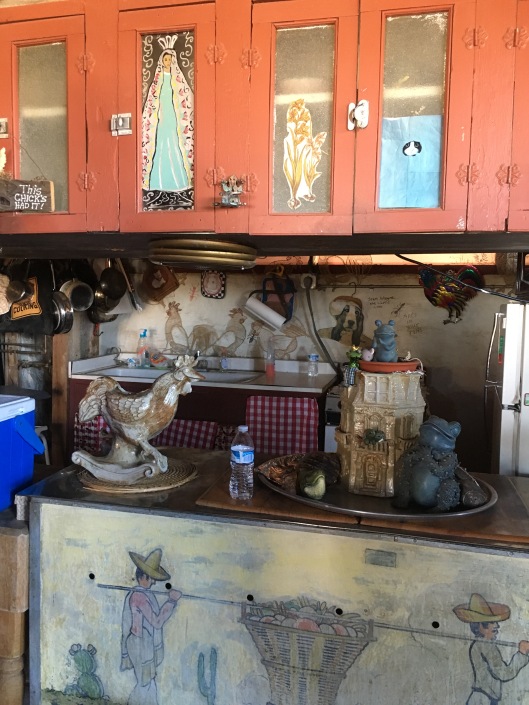 And what house doesn’t need a “jeans room” where old jeans hang from the rafters.

This is the floor in the “chapel”. There were many real snakes in the house as well as these in the floor of the chapel….symbols of protection and wisdom.

After Mary Lou moved in 17 weddings were performed in the chapel…but with the stipulation that the bride would leave one of her shoes behind…”if the bride leaves one shoe then forever will the groom be true”. 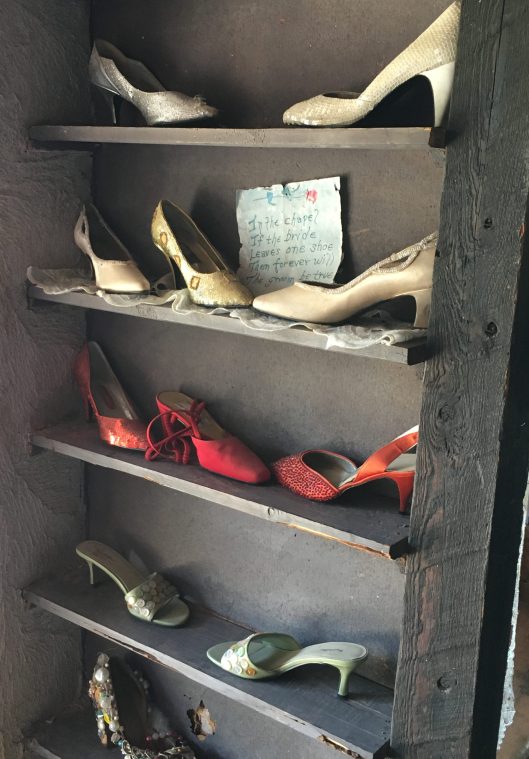 There is also an old organ that Mary Lou brought from Tombstone, Arizona. 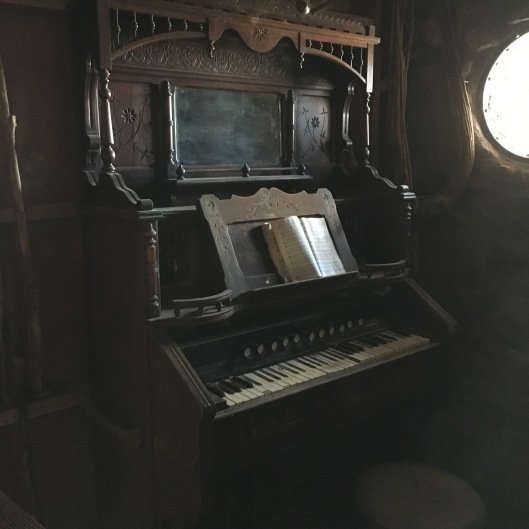 The organ once belonged to the “Chocolate Widow”….a woman who was married several times to mine workers.  Legend has it that when she tired of her husband, she would bake him a chocolate cake with cyanide as the special ingredient.  Since miners were often exposed to cyanide in the mines, nobody gave it a second thought when her husbands died.

And what was behind that trapdoor guarded by the fierce crocodile?  Well, Life magazine was there for the “opening” and wrote about it.

Going down into the 9 foot pit below, Mary Lou found necklaces, gold, cash, letters, a photograph of her father taken before his death….and a small piece of paper…a valentine she’d made for her father when she was a little girl.  And the pit wasn’t the only place Mary Lou found money….she’d move loose rocks in the wall and coins would come pouring out, or she’d find gold nuggets, and sometimes notes from her father.  Who knows what else is behind those walls? After the Life Magazine article was published, people came from all over curious to see the “mystery castle”, so Mary Lou and her mother, Frances, started giving tours.  Her mother died several years later, but Mary Lou continued living in the house and giving tours until “the resident princess” died in 2010.  And so I’ll leave you with these words of wisdom written on the wall, one of many that are scattered throughout the house.

2 thoughts on “A Man’s Home is His Castle….Mystery Castle that is.”