It’s TBT!  (Throw Back Thursday) Well, I’m not throwing back very far…only to the week-end of August 14-16.  David and I went to Krakow that week-end…our first week-end trip.  There’s soooo much to see and do there that we drove instead of taking the train so we could have a little extra time for sight-seeing.  But it didn’t really work out quite that way.  What our Google Maps and Waze apps said was a 5 1/2 hour drive actually took 9 hours!  First the oil light came on and we had to stop and put oil in the car.  David,  being a good former Boy Scout, was prepared and had a bottle of oil in the car.  But he didn’t count on forgetting that his cell phone was in his lap when he got out of the car.  It fell onto the cobblestone pavement and shattered the screen.  A few choice words that I have never heard David say before in the 37 years we have been married just might have slipped out.  But it was still working! (yeah!).

So now we’re driving along admiring the countryside (and the weird things on the side of the road, like this tank)…

when a strange noise starts coming from the car when we hit little bumps in the road.  We were getting ready to pull off and look when a kind man in the car next to us at a stoplight tries to tell us….in Polish….that something is wrong with our car and keeps pointing to the back of the car.  We just nod a lot because we have no clue what he is saying.  So we pull off into a small seemingly abandoned lot and realize that the muffer/catalytic convertor is falling off the car.

We were in the what seemed to be the middle of nowhere…just a crossroads in the country.  David explains (with lots of pointing) and our new Polish friend (who speaks no English) takes a look, then makes a phone call, tries to give us directions in Polish. .. and finally indicates with more pointing that we should follow him.  So we did.  We drove less than 1/4 mile (to the other side of the intersection) and he pulled into this mechanic shop. 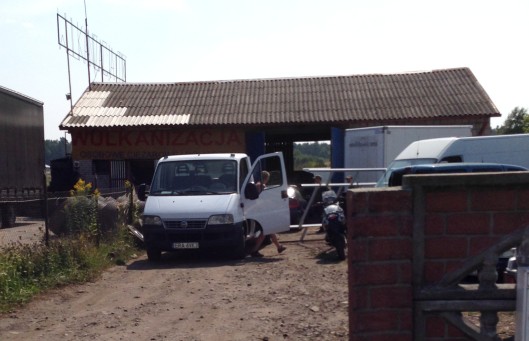 The mechanic (who speaks a little English) takes a look and says “No problem….one hour”.  The mechanic got on a motorcycle and left to buy the parts (little rubber brackets that hold up the muffler), came back and gave us the receipt (so we’d know how much to pay) and backed our car up onto his “ramp” and crawled underneath and put them on.

When we asked his cost for the repair, he said, “Pay me whatever you like.”  Say what?  This would never happen in America!  So we paid him what seemed like a good price.  He was very happy and we were happy because true to his word, we were on the road again in less than an hour.  In case you are wondering the sign translates as “Vulcanization – cars, trucks and agriculture”

About 20 minutes later we finally made it to this restaurant where David had planned to stop and eat. 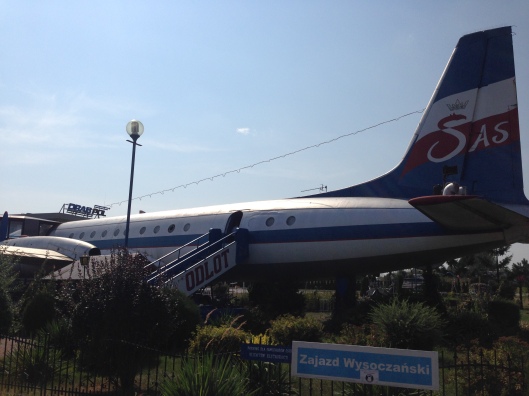 An aviator’s dream…a plane that’s been turned into a restaurant.  No air conditioning, and a little rustic, but a plane nonetheless. 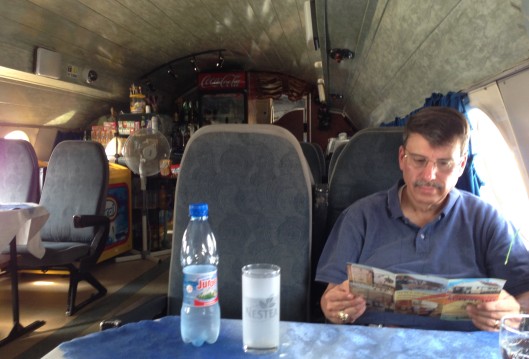 Some unusual things were on the menu..ostrich & turkey stomach…which we didn’t try,

and the food looked good…this is David’s bacon kabob

…although David got sick several hours later. While I was waiting for David (yes, the plane/restaurant had working tiny airline bathrooms)  I seized the opportunity and decided to amuse myself by taking a photo of myself in the mirror.  I’m easily amused. 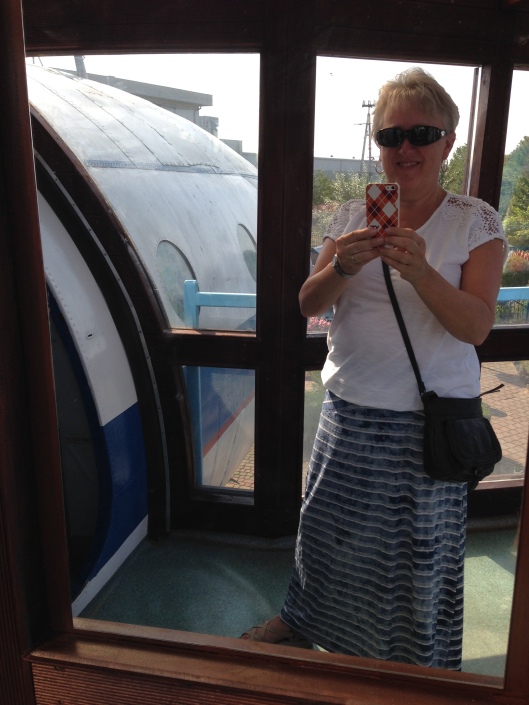 …and then one of the pretty lily pond next to the plane. 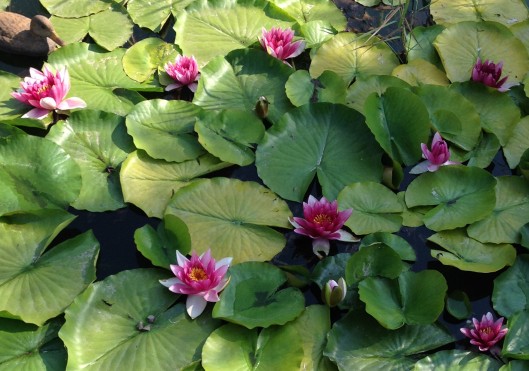 After a few more hours, we finally made it to Krakow.  We walked to the Old Town area, but didn’t spend much time there because we were tired after the long drive and David still didn’t feel well.  But I did manage to get a few decent nighttime pictures. 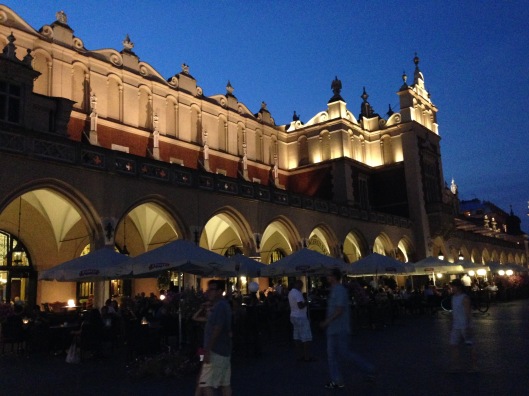 This is Cloth Hall….Outside there’s a few restaurants & bars but inside it’s a huge marketplace.

Below is St. Mary’s Bascilica.

Every hour on the hour a trumpeter appears in the window (on the round tower) and begins to play the Krakow’s famous bugle call (the hejnal mariakci).  However the bugler stops playing midway through in honour of the mythical trumpeter who was shot in the neck while belatedly warning the city of  invaders.  The bugler stops playing, waves at the crowd and then plays again from a window on the opposite side of the tower. He does this 4 times (once on each side) and then he’s done. And just like that we were done for the day too and headed back to our hotel.

1 thought on “TBT – The Drive to Krakow”