I’ve never seen so many cobblestones in my life.  The streets, the sidewalks, they’re everywhere.

The main roads are usually paved, but a lot of the smaller side streets, like the the street we live on, are made out smaller brick like stones like this:

But a lot of times they are made of the bigger, roundish rectangles of cobblestone like this — which can make for a bumpy car ride sometimes. 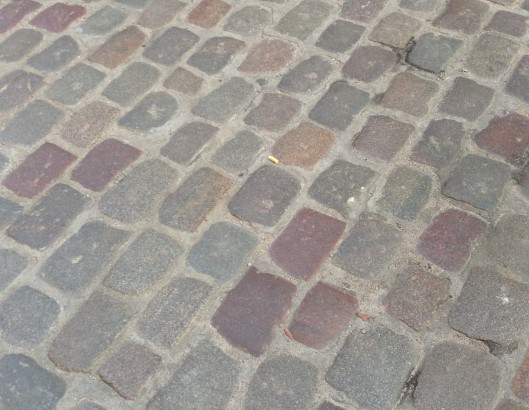 Needless to say, people don’t seem to be speeding down the streets here. but it does make for a beautiful street.

Or sometimes they look like this…like the alley/driveway to our apartment building.  And I do have to say that I haven’t seen any potholes in the stone/cobblestone streets, just the paved ones.

And it’s not just the streets that have some kind of stone…all the sidewalks look that way too.  I don’t think I’ve seen any concrete or cement sidewalks.  The stones on the sidewalks are smaller and usually square, but they don’t always cover the entire sidewalk…nope, they have bigger, flat stones for that.

They like to make them look decorative too…adding arches and designs.  And it all blends in…the street is to the left of the drainage grate, everything on the right of the grate is the sidewalk.

I don’t think I’ve seen a cement sidewalk like I’m used to…at least not in the “downtown” or city part of Bydgoszcz where we live.  The Bydgoszcz Triathalon was held here almost a month ago on July 12th.  The runners ran through the city…..on the cobblestone sidewalks. And on the cobblestone streets.  They marked the streets with arrows so they’d know which way to run 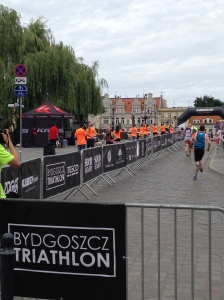 …..I’m not sure how they run on such an uneven surface.    And don’t even get me started on the the women in the spike high heels….That’s a sprained ankle waiting to happen.  I cringe just thinking about it.  I guess you get lots of practice on how NOT to twist your ankle walking on these.

Me?  I like to think of walking on the cobblestones as physical therapy for my ankle.  During my rehab from one of my ankle surgeries, Lucas, my physical therapist, would take me outside to a large grassy area behind their building.  He would search for the most uneven spots — little holes and lumpy grass – and then make me do my balancing and walking exercises on the uneven grass to help strengthen my ankle.  I sometimes thought it was torture…he thought it was great fun!  Walking on cobblestones can sometimes feel the same way…either fun….or like I’m in an endless physical therapy session.