So this is a BFTP Monday post (Blast from the Past).  I just made that up.  I actually started writing this post almost a year ago….because it’s been that long since I’ve written on this blog and I’m now actually hitting the “publish” button.  What made me think of it?  Well, we bought plane tickets a few weeks ago for our upcoming annual family reunion the end of June and I’m flying into Milwaukee once again.

What is the first thing you think of when someone says “Milwaukee”?  Beer of course. After all, Milwaukee has spent many years as being touted as the “Beer Capital of the World”.  It’s home to Pabst, Schlitz, and Miller beer to name a few.

It’s what my father used to call “the working man’s beer”.  Not like all the local craft breweries today that have popped up everywhere…even in Milwaukee.  This was David’s choice for dinner our first evening in Milwaukee.

But Milwaukee has more to offer than beer as I found out when my husband and I decided to extend the time we were in Wisconsin for an annual family reunion and take a few days to explore Milwaukee.

The weather had been cooler than we expected our first few days in Wisconsin..it was in the mid to high 60’s….in June!, so when we saw the weather was going to be sunny and 75 degrees, we decided to take advantage and check out Milwaukee’s Riverwalk.  We were staying about a mile from downtown, so we just started walking toward the river.  This was our first view of the Riverwalk.

I love the little flags that lined the walk depicting the fun things that you can find along or on the river…watching fireworks, rowing, listening to music, sailing, etc.     You can follow the flags along the route 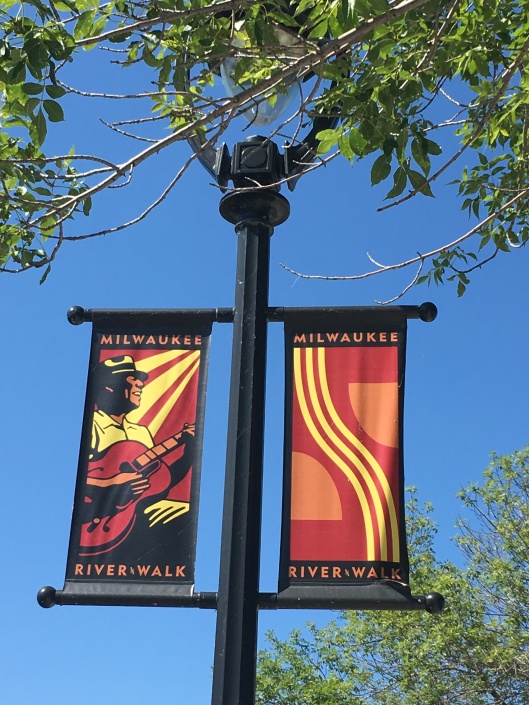 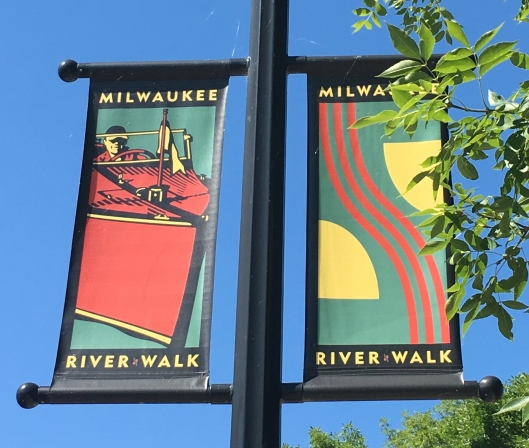 or if you don’t want to look up, just look down and follow the fun markings in the sidewalk. 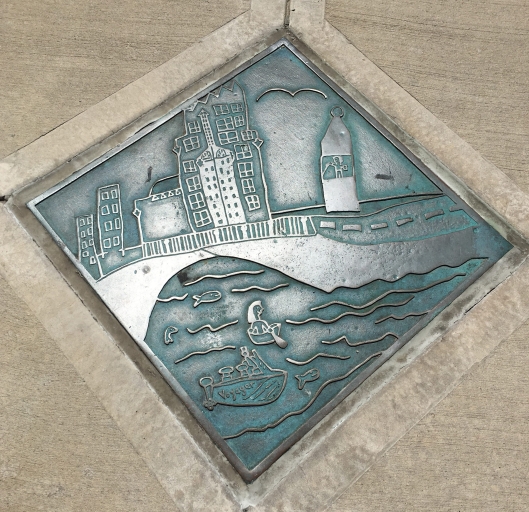 The city of Milwaukee has installed sculptures all along the river too, a project they call RiverSculpture!.  There are lots of interesting pieces along the way. 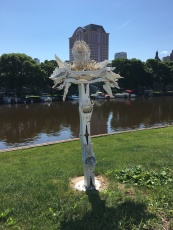 We also passed by the local History Society and decided to take a quick look inside.

Our quick look lasted about 2 hours.  Every summer there is a huge music festival (supposed to be the world’s largest) called Summerfest that is held along the Milwaukee waterfront.  Think 11 days….11 stages and over 800 concerts!!   It was supposed to start the next day, so there was a huge “music” display in the history center. 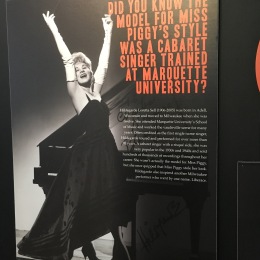 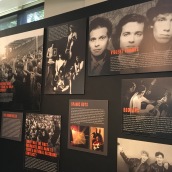 I’m a music lover, so I had to look at everything!  They even have their own soda for the event…and of course T-shirts too!

And since we lived in Poland for a year, I had to include this.  It was an interesting read. 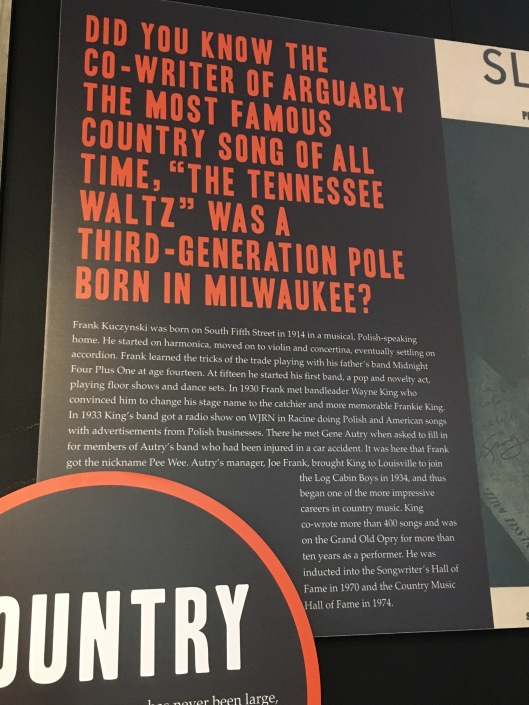 And if you’re not looking, you might miss this sign that is just across the street from the History Center….just stuck on part of a fence.  You learn something new every day! 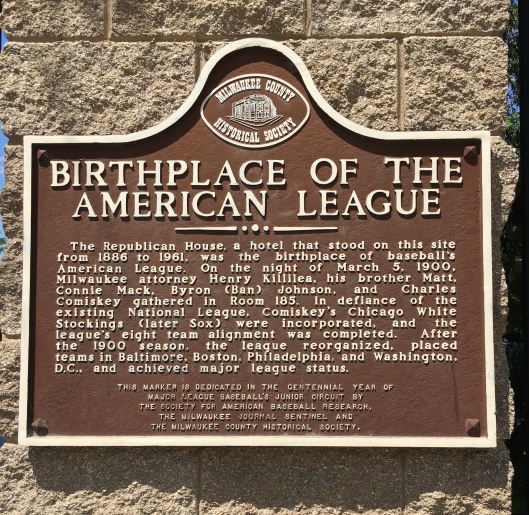 After taking the “history break, we were hot on the trail (River Walk) again.  This time we were looking for “the Fonz”!

The setting for the TV series Happy Days was Milwaukee, so it’s fitting to have this here.  I I was trying to give my best “heeeeeyyy” impression!   Don’t stay too long there because there is lots more to see.  There is also a series of duck sculptures along the Riverwalk to honor Gertie the Duck  and her six baby ducklings.  There is even a book written about her! 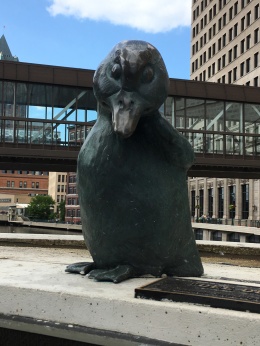 Gertie’s sculpture is on the Wisconsin Avenue bridge.  But my favorite one is called “Gertie’s Gets Her Ducks in a Row”, a whimsical take on a “duck crew”.

Gertie’s crew looks like they need to join this crew team in practicing their rowing technique!  How about that neat fish sculpture on the building?  It’s on the side of the Empire Building and is called “Dream with the Fishes”.  At night it is lit with neon lights that fade in and out to make it look like the fish are swimming.

The Riverwalk is 1.8 miles long and is along both sides of the Milwaukee River.  We had walked about a mile to reach one end and had walked more than half way back when we reached Wells Street which is where the MKE Boat Line is located.  They offer boat tours that go up and down the river, and out into Lake Michigan while they tell you the history of Milwaukee and fun facts about the city.  We just happened to arrive there at 12:00 noon, just in time to get onboard for a 90 minute sightseeing tour.
There are 16 bridges that span across the Milwaukee River.  Some are tall enough for the river traffic, but others must open….like the most common type called bascule bridges (drawbridges) that rely on weights to raise and lower them.

Some are Vertical lift bridges…which I like to think of as “elevator bridges”, the entire bridge rises up like an elevator.

I think I’m becoming a “bridge nerd” like my husband who has a civil engineering degree. I counted and I took 26 pictures of bridges.  Here are a few more. Be grateful, you are only seeing a few pictures. 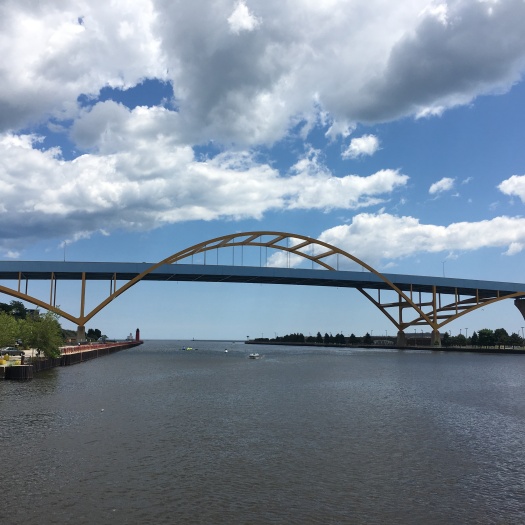 The boat tour takes you along the river, but also out onto Lake Michigan for a great view of the downtown skyline.  The tour guide on the boat gave a great history of the buildings we passed, and a lot of fun facts…you know, information that might come in handy if you are ever a contestant on Jeopardy.

Answer: the 353 foot tall bell tower of City Hall Building in Milwaukee.
Question: What was the third tallest structure in the United States in 1895?

Enough Trivia…. so here are the obligatory pictures of the lighthouse that guards the entrance.

And of course you get great views of the Milwaukee skyline too.

Our next stop after the boat tour was the Milwaukee Public Market….the sign reminds me of Pike’s Market in Seattle.  Same concept, but on a much smaller scale and no fish being thrown through the air.

Lots of delicious food, novelty gift items, candy.  I think this spoon was made for David…but he obviously was only humoring me when I took the picture.  Did you know they make gummy bears in the shape of jet fighters?  And then there is the all important souvenir T-shirt.  But this one is special because it has its own beer bottle opener right in the shirt! 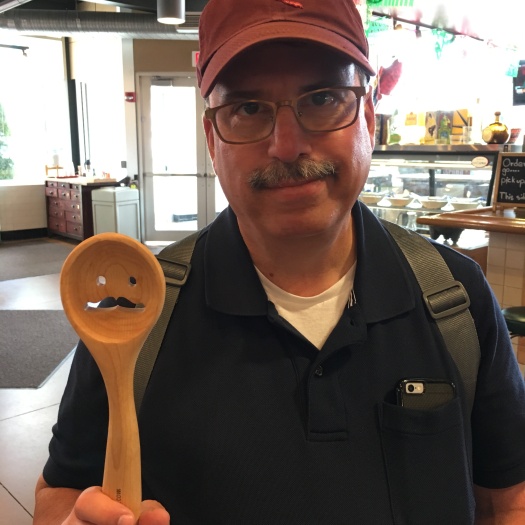 Moving right along we started back to out AirBnB, with a stroll along the water.  And I say stroll because we were tired and walking slow.  One of the grand pieces along the waterfront is the MAM (Milwaukee Art Museum).  From the side (and from our “cruise” it looks like a boat, but a closer view you can see the “wings” that extend out like a flying bird.  Those “wings” fold up….if they are out, like in the pictures, then the museum is open, If they are folded up, the museum is closed.

The huge park area is called Veteran’s Park.  There is a museum here, but also this outdoor sculpture dedicated to Vietnam Veterans.

The three main columns represent those who were killed in action, those who returned, and those who remain MIA/POW.  The five benches represent the five military branches: Army, Navy, Air Force, Marines, and Coast Guard.  The eleven posts (which are not in the picture) that signify the number of years of the Vietnam War.
And also this statue of General Douglas MacArthur.

We were almost back to our AirBnB….Iestimated we walked about 6-7 miles today.  But at the base of the stairs back up there was this:

There were no signs, so I have no clue what it is or what it stands for.  Maybe Milwaukee’s version of Stonehenge??  (Did you notice the marina way in the background?  And I’m going to leave you with this view from when we were half way up the hill.  (You can barely see the little “Stonehenge” through the trees on the other side of the street.

5 thoughts on “Milwaukee is More Than Beer”